For the Good of the Farmer: A Biography of John Harrison Skinner, Dean of Purdue Agriculture 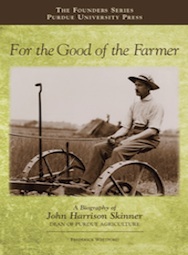 The key role that farming plays in the economy of Indiana today owes much to the work of John Harrison Skinner (1874-1942). Skinner was a pioneering educator and administrator who transformed the study of agriculture at Purdue University during the first decades of the twentieth century. From humble origins, occupying one building and 150 acres at the start of his career, the agriculture program grew to spread over ten buildings and 1,000 acres by the end of his tenure as its first dean. While he excelled as a manager and advocate for Indiana agriculture, Skinner never lost touch with his own farming roots, taking especial interest in animal husbandry. During the course of his career as dean (1907-1939), the number of livestock on Purdue farms increased fourfold, and Skinner showed his knowledge of breeding by winning many times at the International Livestock Exposition. Today, the scale of Purdue's College of Agriculture has increased to offer almost fifty programs to hundreds of students from all over the globe. However, at its base, the agricultural program in place today remains largely as John Harrison Skinner built it, responsive to Indiana but with its focus always on scientific innovation in the larger world.